At the current point of Jewish history, people talk about the Jewish world being elliptical with two foci, or main points, Israel and America. Israel too has two geographical foci which arguably hold greater significance than others, Jerusalem and Tel Aviv. Most American Jews seem to have a stronger affinity for the former than the latter. Some because of their religious connection and some because they just don’t know Tel Aviv. Come on any tour, 10 day or 9 month, and you’ll spend a disproportionate amount of time in the Holy City, with good reason: that’s where the history is. The Kotel, the Old City, the Knesset, Yad Vashem, anywhere you turn, you’ll find either something that happened a long time ago or a museum devoted to illustrating something that happened a long time ago. Plus, it’s a beautiful city and home to the holiest Jewish place on earth so it’s no surprise that most tour buses drive straight there from the airport.

So why do people know so little about Tel Aviv? Because the city only turns 100 in 2009 and there isn’t much of historical or religious significance there (unless you consider “home of the first person to have the chutzpah to barbeque on Yom Kippur” significant.) Tel Aviv though is definitely the Israeli ying to Jerusalem’s yang (there’s the next big alternative band; look out for Jerusalem’s Yang at the 2009 Lollapalooza.) Tel Aviv is the cultural, population, and financial center of Israel. If you want to pray, Jerusalem is the place to do it. If you want to shop, work in high-tech, or find a great late-night coffeehouse, Tel Aviv is your place. Yes, that’s an oversimplification but the point is, most American Jews don’t know Tel Aviv at all and it’s a shame because it has just as much if not more to offer to at least some people (presumably, less observant Jews.) When I was here for 9 months, I was based in Jerusalem for 3 months and spent many other weekends there. Tel Aviv? All in all, I probably spent a handful of days there. Only when visiting Ziv in 2003 did I really discover the late-night bars, the beach, amazing restaurants, and more in this cosmopolitan city. From that point, I became much more attached to Tel Aviv and preferred to spend most of my free time there during my visits. With a limited amount of time here, Tel Aviv always “won” and even turned me a little off from Jerusalem and my memories of guided tours.

So what’s the moral of this long digression? Americans, visit Tel Aviv! Oh yes, and I decided to spend this Shabbat in Jerusalem. My friend Yehoshua had a baby boy last week and the bris was yesterday morning in Jerusalem. I was looking for a reason to leave town for a weekend anyway so this seemed like a good excuse to get out of Dodge (that’s how you say Tel Aviv in Hebrew.) Coming from T.A., the moment the bus pulls into Jerusalem, you know you’re not in Kansas anymore. After the bris, I dropped my stuff off at my friend Ofra’s apartment nearby and headed for the shuk.

This is when I realized that choosing to spend time in a place is very different from being dragged along on a tour. Machaneh Yehuda in the final pre-Shabbat hours is an amazing sight. The busy-ness, the energy…everyone’s on a mission. I’m not sure how to explain it. Because Ofra is out of town and her fridge is, well, as empty as mine, I went to the shuk to shop for my weekend food. Check some of these pictures out… 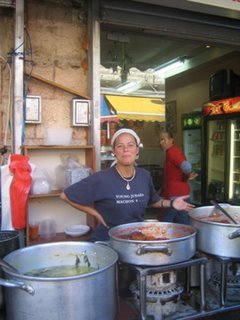 This is Beth who I’ve met a couple of times, most recently 2 hours earlier at the bris. When she’s not studying at a yeshiva here, she can be found once a week working at the shuk. In some ways, that’s the coolest job in the world. Do you know anyone who’s done that? I bought stuffed cabbage, kubeh, rice, and grape leaves for my Saturday lunch. 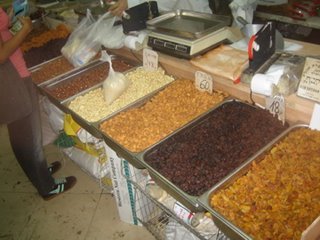 I just ate this for breakfast: cashews, dried apricots, raisins, and some other nut whose name I can’t remember. 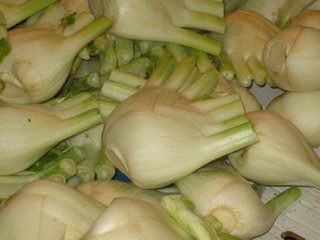 Ok, is this some kind of sick joke? This CANNOT be a real food. (Somewhere, a seven-fingered fat man is missing a hand.) 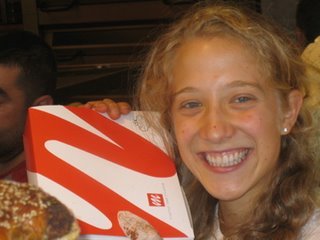 This is Marzipan, the bakery who reportedly has the best rugalach on the planet. Surprise! It’s my friend Amir’s sister, working there while also studying at yeshiva for the year! (Wait a second…suddenly, I’m seeing an unlimited supply of falafel in my future. If you see me with payes next time, you’ll know why.)

After dropping off my food, I walked down the street to Gan Sacher, a park where I solidified my reputation as an unathletic Jew, dropping many easy catches during our Year Course football games in the early ‘90s. 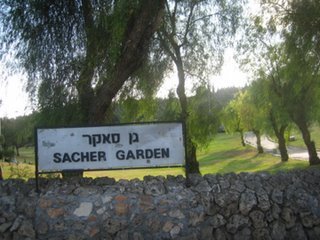 This brings back many memories, some of them traumatic. If any of my friends still have video of me dropping that touchdown catch while wide-open (you know which one), please don’t post it on YouTube.

Ok, time to wrap this up. B’kitzur (in short): I definitely need to spend somemore time in Jerusalem. It was an amazing place to spend the weekend. You really feel the Shabbat in a different way from Tel Aviv. The weather was also much cooler, dare I say, fall-like. And like New York, sometimes you have to get out of the big city (T.A.) for something a little more relaxing (funny, people say the same thing about Jerusalem.) Americans, when you visit, stay for at least 2 Shabbatot. There’s too much of Israel to see in one weekend.