Well, my loyal readers, I have to be honest with you: my creative juices haven’t been flowing the last few days. I haven’t gotten into a normal routine yet in terms of my schedule which sometimes keeps me from writing regularly although I expect that to change (not having a routine) when I finally begin my Ulpan in nineteen days (and counting.)

Even when there’s nothing to write about, there’s always a Jewish holiday. This week is no different. Friday night I was invited for Sukkot (and Shabbat) dinner at the house of my friend Assaf’s family. They had built a huge sukkah and had about 25 family members over for dinner. Wow-I don’t think I have 25 family members total who I know (not counting my religious aunt’s 11 kids. Counting them as 11 of 25 is like saying Roger Clemens had an ERA of 1.87 all of last year, even though it was around 1.50 until September until he had one bad month while injured which completely threw off his numbers. And I don’t care if 95% of the people reading this have no idea what I’m talking about or if it’s a poor example, I’m sure statisticians have a name for a number which holds a disproportionate weight in an average. Ok, that point was horrendously made. And Clemens definitely should have won the Cy Young last year but voters are dumb.) In three years in New York, I don’t recall being in a sukkah even once, and I’m choosing not to count the one at my office because there’s a difference in hanging out in a friend’s sukkah and one not built by choice but because someone from above ordered that it be built by people that weren’t even Jewish, and I’m not counting it in the same way that it’s nice to attend a Hanukkah party unless it’s the company Hanukkah party in which case it doesn’t count the same, and I realize I’m not counting a lot of things in this entry which will not be winning any Pulitzer Prizes.)

Assaf’s family went all out; four or five women were in the kitchen before dinner cooking up a storm. Have you had homemade sushi on Sukkot before? I have. 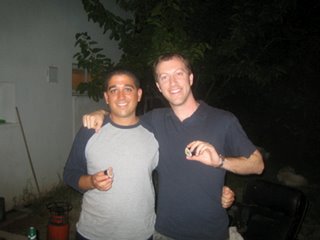 Assaf’s grandfather said a few prayers at the beginning and then we ate a huge feast. I was completely stuffed before the main courses were even served. 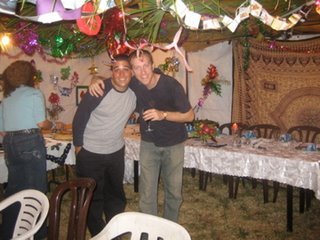 Assaf and I in his family’s sukkah. Can’t we come up with a better translation than “booth”?

I must say, I haven’t really felt this holiday as much as I would have liked. There are virtually no sukkot in Tel Aviv, possibly because there are virtually no houses in Tel Aviv. (This may explain why there were so few sukkot in New York as well. There were however a lot of homeless people and women who carry their dogs in purses.) I remember from Year Course seeing them in Jerusalem in public places like restaurants. Oh well.

Because their normal volunteering placements were closed for the holiday, some of my Year Course kids planned a small carnival-type event at a community center where they live. Apparently this is a common thing in Israel during holidays when kids are out of school. It’s called a “heh-peh-neeng” (what you and I might call “happening”). The Year Coursers had a bunch of booths like “throw the ring onto the cone”, “throw the basketball through the hoop”, and other various games which involve throwing. Sukkot ends this weekend just as Simchat Torah is beginning. Expect an update!