‘Mazal Tov! You’re a Human Being!’

I turned the big 32 this week and I’m not going to lie: it feels unquestionably, unequivocally, absolutely, significantly, and completely different from 31.

Pop quiz: what do people say here on your birthday?

Ok, I’ll tell you. They say “Mazal tooooooooov!” I walked into the office Wednesday morning to hear someone yell “mazal tov!” I thought, “Thanks! What did I do?” That was my humorous and recurring moment of the day. Eventually, or after about 2 seconds, they’d get around to “Yom Huledet Sameach!” but only after first congratulating me for walking upright, or whatever it was I did successfully.

It was a great day. My boss Ayana and my boss-to-be Michal, once Ayana goes on maternity leave, surprised me with a cake, and my co-workers lifted me up in a chair. Pictures to come. (My unofficial count of Michals mentioned in this blog is now 3. The 10th one wins one million shekels.) For my co-workers back in the States, it’s Michal Avraham (my YJ co-worker from Chicago). Won’t that be fun? Piece of advice for you youngsters starting careers in the Jewish world: don’t burn any bridges. Your roommate’s fraternity brother’s niece’s Rottweiler might be your next boss. It’s a small world.

After a delicious lunch with Ziv and a nap, I went jogging. I. WENT. JOGGING. Now for some of you, this may not be big news. While I don’t make New Year’s Resolutions (for the Jewish or secular new years), “getting in shape” has been the proverbial new year’s resolution which hasn’t even gotten off the ground. It’s hardly even been on the ground. A few times in my last apartment complex, I managed to go to the small gym and run on the treadmill but never for more than a week. “It’s really hard to run without music!” I would tell one of my completely justified critics. “SO BUY A WALKMAN!” he would answer one, or seventeen times. (I didn’t even have an acceptable response. Who wants to buy a Walkman or any ____-man in 2006? And ipods are pricey! And besides, I’m waaaaaaay too busy to fit exercise into my schedule anyway. And working out is SOOOO overrated. And hey, Sportscenter is starting! Who wants pizza?!) So with a few hours to kill before my party, and with my relatively new and unused ipod, and living just off the scenic Rothschild with biking and walking lanes, hey, why not?!

This whole jogging (outside) to music thing was completely new to me. It’s like being in a movie, living your life to a soundtrack. My soundtrack was “Permission to Land” by The Darkness. Hey, if you’re gonna motivate yourself to run and not collapse, it better be to something between ESPN Jock Jams and “Appetite for Destruction”. Enya is out.

I ran all the way west to Allenby Street goes north south not far from the beach and then started taking left and rights to the get to the water, running through Neve Tzedek, Tel Aviv’s first neighborhood. It feels like its first neighborhood, much more quiet and residential than the rest of the city. By the time I got to the beach, I was completely winded and unable to run home. (So joggers, are you supposed to take money and your bus/train pass with you just in case? TEACH ME!!! I WANT TO UNDERSTAND!!!) It was really beautiful, watching the waves crash against the shore while listening to Justin Hawkins sing about his heroin addiction. Touching, really. For the first time, I appreciated why people run outside. I walked along the water for a few minutes, as the wind blew through my hair and the 10 liters of falafel oil in my arteries began to thin.

As I made my way back, I got completely lost in Neve Tzedek. The roads were completely empty and although it was only 8 PM, sometimes you can’t help but get a nervous feeling in any city when you’re lost at night and the only one on the streets. Then I thought, what could possibly happen? These are JEWS! What are they gonna do, jump out of a dark corner and do my taxes? (That “they’re JEWS!!!” line never gets old to me. I know there are bad neighborhoods here, I just don’t know what that means. “This just in: In a heart-breaking story, a three year-old boy was a victim of a drive-by menorah lighting.”)

And then there was the highlight of my birthday, my evening at Shalvata, a bar on the port of Tel Aviv. Lots of friends came out, most of them past and current co-workers, plus a few other friends. It was the best time I’ve had since I’ve arrived. For my co-workers in the States, here are some familiar faces. 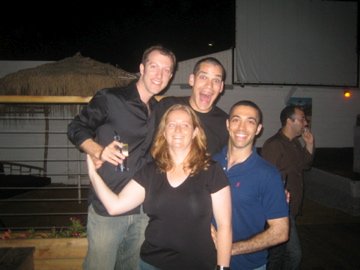 Don’t be fooled. The man next to me is just under 8 feet tall.

And thank you to those who called. It made my day.

So there you go, my loyal readers, I’m a little bit caught up. Post some jogging tips! Am I supposed to run with key in hand the whole time? Putting it in my shoe is way too uncomfortable. COMMENTS, COMMENTS, I LOVE COMMENTS!