Israel is a Small Place

Posted at 3:09am on Sep 9, 2006 in Benji's Getting Serious, Current Events, I Love This Place by Benji Lovitt 0 Comments

The primary topic of this post was going to be the solidarity “rally” Thursday night in Rabin Square (the plaza in Tel Aviv renamed for Prime Minister Yitzchak Rabin after his assassination there at a peace rally). I put the word in quotes because as written here, this was not supposed to be a protest but rather a show of support to the kidnapped soldiers being held in Gaza and Lebanon, Gilad Shalit, Ehud Goldwasser, and Eldad Regev, and a reminder that Israel will never forget about any of its missing soldiers. 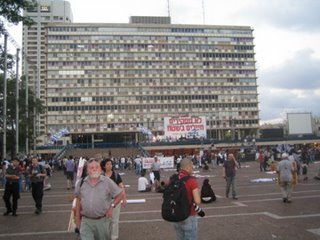 This type of event has a different name in Hebrew although I’m not sure exactly how it’s translated so I’ll just call it a rally. The banner of choice was the following, translated as something like “We will not abandon soldiers in the field.” 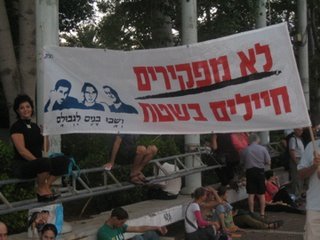 I thought it would be an interesting event to attend so I walked from Ziv’s house, about a 20 minute stroll. By the way, I’ve noticed my slower pace of walking since I left New York. Most people think Manhattanites are always in a hurry. I’m not certain that New Yawkers are in any more of a hurry than suburbanites, it’s just that their method of speeding is on foot bumping into people rather than cutting them off on your local interstate. I sped when I had a car (no I didn’t, Mom and Dad, I’m just kidding) and for some reason in Manhattan, I always felt like I had to pass every pedestrian to hurry to my destination, elbowing grandmothers along the way. (Don’t judge, non-NYers, but I was often overcome with devilish pleasure at bumping someone, racing away, and not having to turn around and say “excuse me” because after all, who says “excuse me” in New York? If you don’t understand what I’m talking about or think I’m insane, well, try crossing midtown during rush hour.) Anyway, since I arrived here, I’ve found myself walking at a MUCH slower pace. Perhaps that will change when my schedule gets busier but for now, I’m doing my best to re-learn, umm, MANNERS by giving people the arm wave and letting them cross in front of me at times like a human being.

ANYWAY…I got to the event at start time, 7 PM. Crickets. It was pretty much empty. I failed to remember that things in Israel start LATE. At 8:00, the plaza was full but by no means completely packed. A number of friends and relatives of the missing soldiers spoke and a couple of songs were performed by famous Israeli singers including “Ein Li Eretz Acheret (I Have No Other Land)” by the original singer from decades ago. Despite the lack of an intended political message, there were of course protesters wearing shirts that said “Olmert Go Home”. 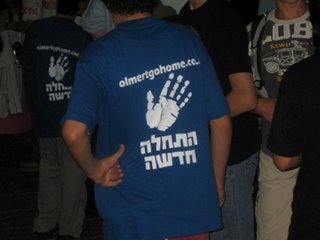 So why the chosen title of this entry? Last week, I talked about how small the world is when you’re Jewish. Well…at the end of the rally, I saw a former co-worker of mine from New York, a woman named Tali, who lived in the States for 2 or 3 years and overlapped with me for about a year. Two minutes later, I saw an acquaintance of mine named Leora who I briefly met in Atlanta who I tracked down here and had dinner with earlier this week (she moved here last year). Ok, fine-you run into people here. But…the real thriller of the night was on the beach where my friend Michal was having her goodbye party before moving to the States to work in the national YJ office for a couple of years. It was an amazing night. Relaxing on the beach with music in the background after a week of work…nothing like it. As she introduced me to one of her friends, my jaw dropped. Before I even saw her face, my ears perked up when Michal said “this is my friend Racheli”. I’ve only met one Racheli before, my friend Evan’s “adopted sister” on Year Course 14 years ago when we lived on a moshav. Those of us who lived there razzed Evan jealously for having the best family. When this mystery woman Racheli turned around, I knew immediately it was her (since more than 50% of the women I know look EXACTLY THE SAME now as they did in college. And for some reason, more than 50% of the women I know also think they’re the only ones who seem to get carded and are shocked by it). Were all my pictures not boxed up in Texas, I’d include one from back then. Here is one from Thursday night about 30 seconds after we freaked out. 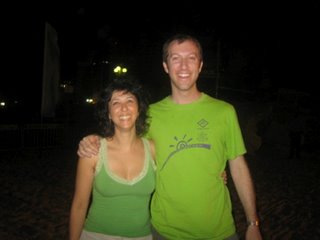 I know I said last week that I should never be surprised when these things happen but how can you not be surprised when you run into your friend’s adopted sister 14 years later at a beach party? (Evan, I would have called you if I had your number. By the way, I told Racheli that you fell into some gambling problems and became an exotic dancer. Was that wrong?) That was as obscure a meeting as any I’ve ever had…I can’t wait to see who I meet next.