If Cleanliness is Next to Godliness, Why is There Nothing Next to the Washing Machine?

Posted at 6:39am on Sep 9, 2006 in Life on the Home Front, Now I'm Just Being Silly, This Aliyah Moment is Brought to You by the Letter Aleph by Benji Lovitt 0 Comments

Two comments regarding this recent post:
1) Kibbutz Galuyot is not a kibbutz. It’s a phrase which means “ingathering of the exiles”.
2) About my roommate yelling “die!”: I remember hearing stories years ago about Israeli mothers in the States yelling that at their kids and their non-Jewish neighbors probably thinking they were horrible parents.

Let’s get started. Everybody back home always asks how things are going here, if I like it, etc. While it’s a perfectly acceptable question to ask, the best answer is probably “ask me in a year”. There have been great experiences, previews of things to come, and some frustrating and challenging periods, but I have little idea of what my life is going to be like. I’ve hardly been able to settle into my place, I haven’t begun my Ulpan yet, I have no idea what I’ll be doing in a year from now, and there’s an adjustment period. I talked to my old co-worker Joy yesterday who moved here a year ago and she said it took her about a year to get settled in feel like she had a normal life here. The only thing I can say for sure is that the weather’s cooled off a bit, people say “ehhhhhhhh” a lot, and I have eaten enough falafel to feed a small third-world nation.

On the topic of adjustments, before I arrived, I knew the workplace was more casual here but what I would wear to work every day hadn’t really crossed my mind. Let me just say that I probably didn’t need to bring 947 dress shirts and 485 pairs of slacks. I’m currently working on like a 4 shirt rotation so it’s about the time to start shopping for some casualwear. Having recently moved into my new apartment just a couple of weeks ago, I’ve been waiting to do laundry any day now. This morning was a good time.

Now, my loyal readers, let’s take a minute and recognize some of the great duos in history:

1) George Michael and Andrew Ridgeley: Better known as Wham!, they recorded “Wake Me Up Before You Go Go”, “Careless Whisper”, “Freedom”, and more. Some people will claim that I still own “Make It Big” on cassette. Let’s just move on. I SAID, LET’S MOVE ON!

2) Neil Paige (Steve Martin) and Del Griffith (John Candy), “Planes, Trains, and Automobiles”: This movie kept me laughing all the way to the mid-90s. 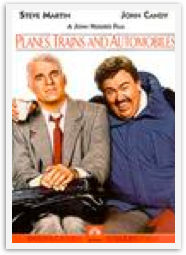 3) Chips and salsa: Not to brag, but I hold the world record in the 800 bag speed eating category, set freshman year of college during the Cowboys’ glory days.

4) Major Applewhite and Ricky Williams: While Ricky will forever be remembered for his Heisman and record-breaking season (and ability to inhale large amounts of the wacky tabacky), Major led the Texas Longhorn football team to exciting comebacks in spite of his diminutive size.

5) Washing machine and dryer: This amazing duo managed to remove mud, dust, ketchup, and G-d knows what else from my clothes over the past 31 years of my life while drying them to be worn again.

I still have fond memories of the first four. SO WHY AM I SO BROKEN UP ABOUT THE DIVORCE OF THE FIFTH??? Because I have a washing machine with no dryer in my apartment!!! 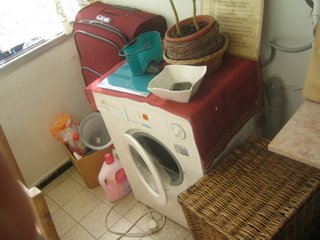 To quote Frank Costanza when discussing the chicken, hen, and rooster, “SOMETHING’S MISSING!”

For at least the next several months, I’ll be drying my clothes Amish-style, on a clothesline. (I have to confirm with my roommate but I think she might be offering a butter-churning class beginning after the chagim.) After they were done washing, I opened the kitchen window to survey what was about to take place. Leaning out my third floor window as I began to clothespin my frightened undies to the line, I felt like Luke Skywalker holding onto the antenna for dear life in Cloud City. Is this really safe? I guess Israelis don’t have to ask the burning question of “why do single socks always disappear when you do laundry?” It’s fairly obvious here: THEY FALL TO THEIR TRAGIC DEATH!!! Look at this picture, for G-d’s sakes!!! 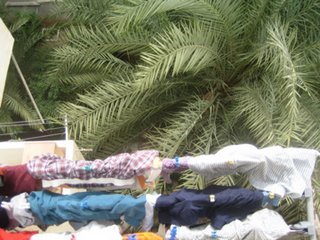 “Um, boss? Did you notice that you hung us out to dry above a freaking tree???”

It should be an adventure. If you hear a story about a pedestrian injured by a falling sweatsock, you’ll know why.