Happy Birthday to the World!

Posted at 1:48am on Sep 9, 2006 in Benji's Getting Serious, Current Events, I Love This Place, Jew Stuff by Benji Lovitt 0 Comments

Ahh, Friday. The weekend. Time to rest, catch up on errands, and yes, my loyal readers, blog. Rosh Hashana was exactly what I needed: two days of relaxation. As I suspected, it was not the chag I was used to from the States. There’s no one way to celebrate here but it’s something special for everyone. Friday night I went to my friend Rani’s parents’ house for dinner. While no prayers were said, it was a nice family meal complete with the symbolic foods like pomegranates which are eaten to symbolize…um, anyone? I do know that the legend is that there are exactly as many seeds (or whatever those things are we eat) as mitzvot, 613. It’s a nice story but I haven’t counted. Ok, I just checked online: here’s the answer. A few hours later, we were in a bar running into all kinds of people he knew. After a late-night hamburger, I got home and went to sleep around 5 AM. That’s how we celebrate in Tel Aviv, I guess. 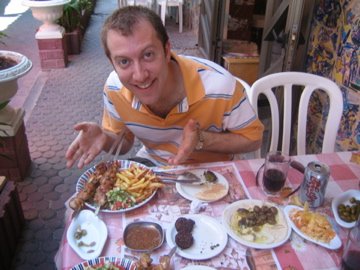 Looks like it’s gonna be a good year, huh?

Saturday afternoon, I was chilling on a park bench, drinking ice coffee with Ziv at a little food kiosk on Rothschild Street (very scenic with people walking their dogs and pushing baby carriages). Second night, my friend Noga’s house, more observant, more symbolic foods. For quite a while, we talked about politics and Israeli history, specifically around the Yom Kippur War. Her family told me that although we didn’t lose that war, we certainly didn’t win. Aside from the large number of lives lost, Israel’s psyche was damaged after the surprise attack and the Arabs, despite their massive losses by the end, celebrated it as a victory for what they inflicted on Israel and for puncturing its balloon of invincibility. Much like this last war. After YK, Golda Meir resigned for overseeing the huge failure in intelligence. Many are clamoring for Prime Minister Olmert’s resignation now. History is truly unfolding daily here.

I recently mentioned to Ziv that I don’t feel any more informed about Israeli current events even though I’m living here. After all, I’m just looking at the same websites my friends and I read in the States. He said that I may not know any more facts, but I will have a greater sensitivity to how people feel and are affected by the news by living here. So as evidenced by this last paragraph, I’m very interested to hear from “the people”. The second day of the chag, my roommate Hila invited me to a barbeque thrown by her parents’ good friends. This poor girl…when we got into the car, I saw an orange ribbon tied around her gear shift. Not sure if it was what I thought it was, I asked her why she had it. She told me of course and I started asking her what she thought of the disengagement. About two minutes later, I asked her what she thought about this last war and she said “Die!”, meaning “enough (with these questions!” Think “Dayainu” at the Seder.) That’s got to get annoying. Imagine relaxing in the middle of Central Park on a nice, sunny day and the guy next to you keeps asking what you think about the American Dream, the war in Iraq, and whether or not democracy is working. It was funny. I plan on asking her 8 bajillion more questions.

The barbeque was fun. At one point, the people remaining around the table were born in the States, Iraq, Iran, and Morocco. That’s Israel. Or as they say here, “Kibbutz Galuyot”, also a kibbutz which was founded by and still has a large immigrant population. Hila’s father works for the Defense Ministry. I proceeded to ask him 4.53 kajillion questions and we got to the subject of Iran. I asked him what he thought would happen and he said that if need be, Israel would attack Iran to destroy all the reactors. I asked, can Israel do it? (It would be a more difficult mission than Iraq in ’81 because there are something like 20 different targets.) He said, yes, we could. This is nothing that’s not reported in the papers but it was interesting to hear it from someone’s mouth.

All in all, a nice holiday. I wanted to go to shul at one point but also wasn’t willing to just walk into a place and be bored out of my skull as I was on Year Course when I went, only to find out it was an Orthodox Sepharadic synagogue where I couldn’t follow anything. I hear there are some good synagogues for Westerners and olim; I’ll do some research for the future.

Shana tovah to all!