THE BIG DAY (and I’m not talking about football season)

Posted at 1:46pm on Aug 8, 2006 in Benji's Getting Serious, I Love This Place, This Aliyah Moment is Brought to You by the Letter Aleph by Benji 0 Comments 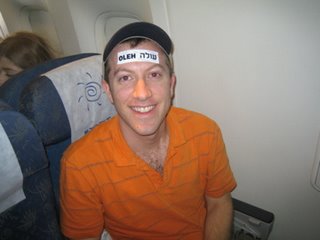 Here I sit, in seat 45A. Hardly an empty seat on the flight, and somehow there’s one next to me. I was really hoping to post an entry from JFK Airport before boarding but I just didn’t have the time. Someone asked me this morning how I was feeling and remarked that she would have been freaking out. When you’ve been mentally preparing for a move for so many months, especially for one that’s presumably exciting and meaningful, at some point there’s nothing more you can do than to relax and enjoy it. Everything’s done-I just had to get in the cab and head to the airport. (Check back in with me in a few days when I’m having to buy furniture, grocery shop, and figure out how to translate “Doctor, my small intestine is inflamed.” I was shockingly calm at the airport. Perhaps because I’ve been to Israel so many times already? Because I was emotionally spent? Who knows…it hasn’t sunk in that I’m starting yet another chapter of my life but after moving to New York, how big of an adjustment can it be?

For those of you curious about what a Nefesh B’Nefesh (NBN) flight is like, it began when I walked up to their check-in table and the staff member greeting me knew my name. Damn, they’re GOOD. They passed out bags with some information enclosed, along with giveaways from Israeli cell phone companies and other various vendors, along with my plane ticket. After I checked in, there was a ceremony with speakers from NBN, the Jewish Agency for Israel www.jazo.org.il, the Israeli Consulate, and El Al. As local media and passengers took pictures, one of the speakers said “you’re moving from the sidelines of Jewish history to center stage.” (Isn’t that a mixed metaphor? He had me when he was started the sports talk but lost me halfway through…)

It turns out that there are FOUR graduates of Year Course on my flight, the program I attended before college and will be working for when I arrive. (If that doesn’t speak volumes about Year Course, I don’t know what does.) I’m sitting next to one of them, a 20 year-old named Scott who’s going to be joining the army a few months after his arrival. Fifteen minutes after I learned that he’s as big of a sports fan as me (minus about 10 years), he dropped this bomb on me: there’s something called Slingbox (?) which, when connected both a TV and computer, can download a television show to a website?!?! Can someone confirm this? If so, I’m taking volunteers to send me the Texas-Ohio State football game next month. Don’t even pretend like you weren’t going to watch.

Without going into details about what NBN does (check out the website for more info), one of the benefits they provide is an easy absorption process without a lot of the nightmarish bureaucratic stuff. More specifically, government officials on their chartered flights who process a lot of your paperwork for you there, saving hours of office visits (think your local DMV.) However, because of the current situation in Israel, there aren’t government officials available on the flight to process our paperwork. Scott and I were interested to see how this whole thing works but instead, a lot of it will just happen by mail.

If you’re wondering what the flight is like in terms of activity level and energy, it’s pretty much your typical El Al flight. A lot of religious people, tons of kids, and people walking all over the place passing the time. When the pilot addressed us over the intercom a few minutes ago, he said “shalom, olim” (hello, immigrants). That was pretty cool. A media person with a big video camera walked by a few minutes ago.

Fast forward a few hours…I arrived and was greeted by my co-workers and friends Yehoshua and Mike, who moved from NY and Scotland respectively one and seven years ago. Here they are… 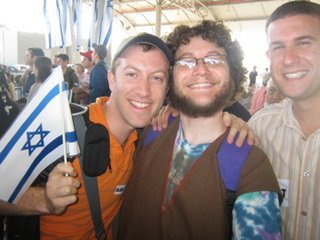 Fast forward again and I just finished a delicious meal with my friend and temporary host, Ziv, not far from his apartment in Central Tel Aviv. Mmm…spicy meat. 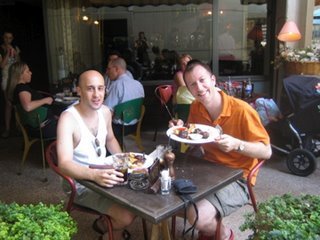 That’s all for now…happy birthday to my mom.