I hope my life picks up soon before I become attached to my camera and laptop. The “this is going in the blog!” line continues to pick up steam. As long as my mom is enjoying it, I’ll probably keep writing. I saw a ton of people this morning at the picnic. For my old co-workers in NY, take a look at Emil and Michal. 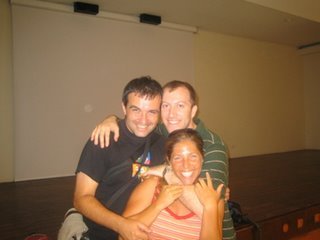 Afterwards, a bunch of us went to the beach and sat at an outdoor cafe, eating shnitzel (basically fried boneless chicken, an Israeli staple), cheeps (fries), and watermelon. Although Israelis work on Sunday, Friday is sort of a weekend day for a lot of people. People like government workers and shop owners work Friday but most office workers have off. Because a lot of places are closed Saturday for Shabbat, Friday is the only or best time for people to get errands done. And it’s definitely a great time to go to the beach. No pictures this time. Not much interesting to say here but you’re still reading, aren’t you?

Ok, so this was funny to me. I went to the house of my friend Noga’s parents for Shabbat dinner. Their grandkids were there as well watching a few videos. Here are some of the ones Noga’s parents had. 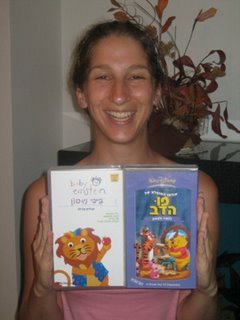 Until I figure out how to insert captions, I’ll just have to write in paragraph form that you’re looking at Baby Einstein and Poo HaDov, otherwise known as Winnie the Pooh. And then there’s everybody’s favorite… 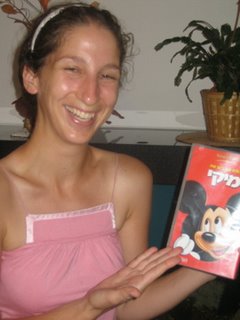 You’ll have to translate that yourself.

The highlight of the evening was when I heard “L’Dod Moshe haytah chavah, EE I EE I O!” These are things only Americans could find funny. I’ve always found words directly translated into Hebrew hilarious, probably in a slightly condescening way (along with Israelis speaking English with their “funny accents”.) What can we say, we Americans have always been less culturally exposed to other countries, probably because our country is absolutely mammoth which makes it hard to travel abroad. We all got a kick out of doing our best British accent as kids and they even made a sitcom out of this concept, a personal favorite in “Perfect Strangers”, a show where we got to laugh at the linguistic missteps of a silly foreigner. (If anyone can reproduce the episode where Balki sings “I’m So Excited” by the Pointer Sisters, I might pay a large sum of money.) The point is that I often laugh hysterically when I discover a word, song, or idea translated or brought to Israel which sounds funny. I suppose this will pass as I realize that there is a world outside of America (although the appearance of something on a menu pronounced “bah-falo weengs” will be funny until I die.) Since I haven’t gotten any other suggestions, maybe I’ll change the blog title to “Foreigners are funny.” (Before anyone responds, I know I’m the foreigner here.)

One more thing…in the elevator on the way out, a complete stranger entered and pulled gum out of her purse. After she took a piece for herself, she offered us each one. When we got out, I laughed and said “that would NEVER happen in the States!” The woman responded “Po, chamim; b’America, karim.” Or “In Israel, people are warm. In America, they are cold.” Am I allowed to laugh at that? Hey, nobody ever said Israelis were shy. I look forward to finding out what other acts of kindness I’m on the receiving end of.

So how did Old MacDonald get changed to Uncle Moshe? Now THAT is funny.